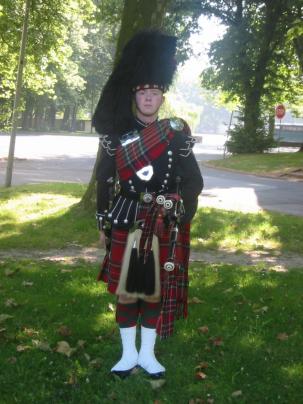 My name is Andrew Elliott and I started piping at age 12 at Alva Academy under the instruction of Mr. Logan Tannock (him self an award winning piper). I then played with the local pipe bands, where gained considerable experience in both competing and performing. Finishing high school I then enlisted in to the British army.

After 7 long months of infantry training I joined my regiment, 1st Battalion Scots Guards in Wellington barracks London, carrying out ceremonial duties, which include Trooping The Colour (The Queens Birthday Parade). The Scots guards are renowned for their discipline and attention to detail. Here in the regimental family I was taught the importance of immaculate standards. These standards still live with me in every aspect of my life.

In 2004 I attend the esteemed Army School of Piping at Redford Barracks. Where I furthered my professional standards and knowledge of the instrument.

The army gave me the opportunity to travel and be part of some of the worlds premier events and parades.

I give credit, in particular, to the army for instilling a deep passion for the pipes, and especially for Piobrachd (pee-brock) the classical music of the Highland bagpipe. The army also taught me to create the highest standards, not only for dress and turn out but in performance and professionalism.

An extremely busy day at Scotia yesterday with 11

Our first Wedding @theolddrbells for the marriage

Saturday’s Wedding #balgeddiehousehotel for the

A beautiful day up at the Atholl Palace yesterday

We support the @ScotlandFA today but we need the @

A last minute call on Friday night as their piper

Beautiful day yesterday for the Wedding of Daniell