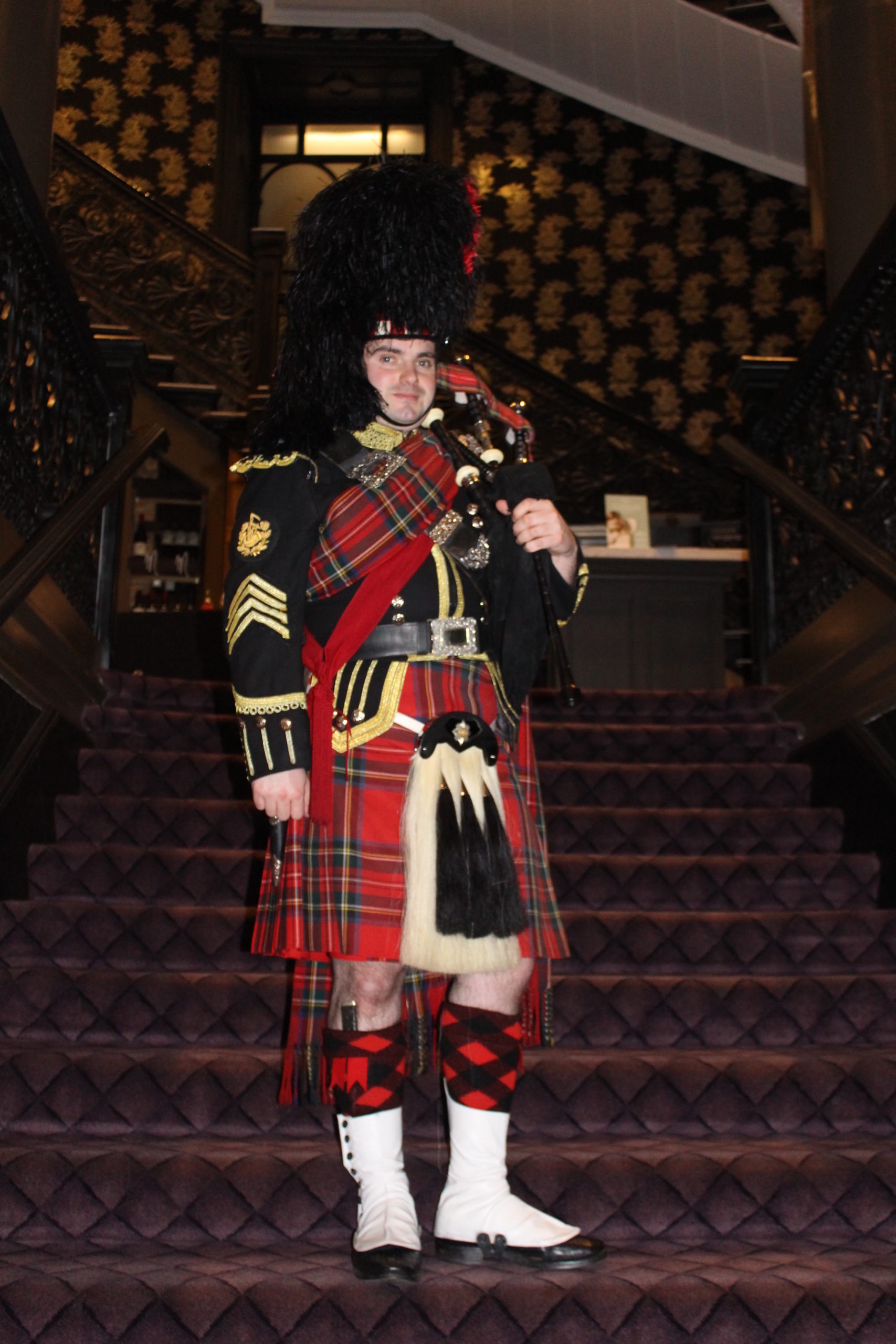 Bagpiper Andy started piping at the age of seven under the tutor Dougie McNichol at Camelon Pipe Band in Falkirk, and moved with him to Linlithgow and District.

Still being young he transferred to the Stirling and District Schools Pipe Band under P.M. Sandy Davidson. With them he traveled to the Millennium Dome in London in 2000.

He also performed at a Scottish festival in Belgium.

He then joined The Royal Burgh of Stirling Pipe Band, where Stuart Cassels was P.M. As a performing No. 1 Band they played all the premier Scottish venues : Gleneagles; Turnberry, Dalmahoy; Edinburgh Castle; Stirling Castle; Scone Palace; Glamis Castle; to name just a few. This band won the best performance prize two years running at Cowal Highland Gathering. Stirling went on to be in subsequent years to be world champions in grade three and four at the world championships in Glasgow. The band played in the Stad. de France in Paris with Shotts and Dykehead pipe band. For a short period Andy was P.M. of the grade 4 band.

Andy then moved to Drambuie Kirkliston under P.M. Ian Duncan. In 2006 they won grade 2 in the worlds.

Following the collapse of Drambuie. Andy joined Lothian and Borders Police Pipe Band, with whom he traveled to Paris, where they not only played the Scottish rugby team onto the pitch but played at the Moulin Rouge with the feathered dancing girls on the Saturday evening.

Andy has also played for the T.A. Highland division band for the last 4years years.

He is a regular player with the “Wallace Clan” traveling with them to China  for the Chinese new year festival, and many festivals in Europe. They also appeared on the BBC’s *Test the Nation”. A development of this band is “Stramash”.

Andy was also an occasional player with The Red Hot Chili Pipers having played on their middle east tour.

Returning to the Royal Burgh of Stirling bagpipe Band , he played for Grade 3 and was P.M. For the Grade 4 untill Autom of 2011. Andy has now steped back up the grades to grade 1 with the world renouned Vale of Atholl piper band.

At the beginning of 2010 Andy found himself in Chelmno , Poland, where…. yes he was the piper who traveled 14 hours in 5 feet of snow to placate his homesick sister ( also a piper). He and Amy performed at the “Festival of Love” and were featured on national Polish television.

Although Andy is a professional bagpiper, and plays for weddings, funerals and corporate events all over Scotland. He is the resident piper at Gleneagles Hotel where he does many Weddings