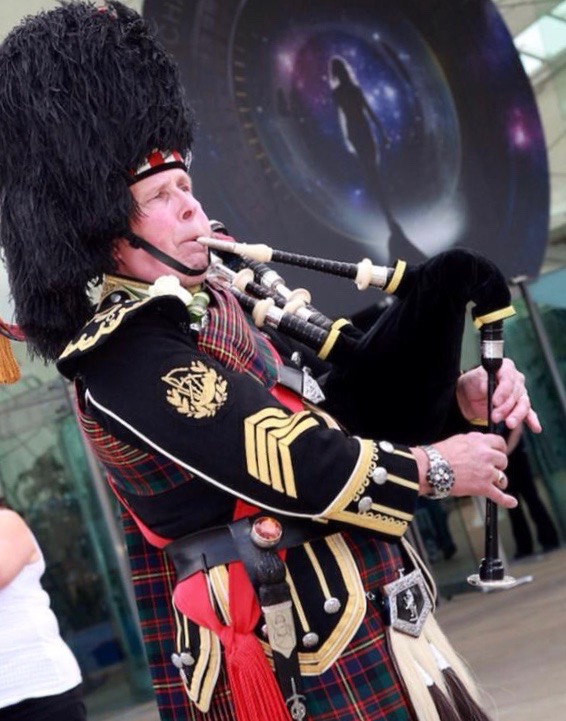 Bagpiper Iain lives in Uphall, West Lothian and has played pipes for many years.

Iain is a traditional Bagpiper with an extensive repertoire, who regularly plays for private and corporate functions, from weddings and funerals to Burns Nights and Scottish welcomes – and anything in between. Due to his proven record of performing, Iain is is well-known for his highly entertaining Burn’s ‘Address to the Haggis’.

He learned to play the bagpipes as a member of the Glencorse Pipe Band, then had a spell with the Woolmet and Danderhall RBL Pipe Band, the Scottish Gas Pipe Band, the Lady Victoria (Newtongrange) Pipe Band, and then the newly reformed Penicuik and District Pipe Band, competing in the various grades at all the local and major competitions.

He developed an early interest in playing solo, and under the guidance of Iain Mcleod learned to play for highland dancers and became a regular performer at ceilidhs and corporate events in and around the Edinburgh while providing the piping for local dancing school competitions and display events. Over the years he has played at most of the well known Scottish shows in the Edinburgh.

In 40 plus years of pipe bands, competition, and solo playing, he has have formed an entertaining repertoire which includes tunes and banter for all occasions, a mix of traditional, classic, and modern music, and makes every effort to satisfy even the most unusual musical requests! Weddings are a particular speciality he prides myself in keeping guests entertained throughout the event.

He wears the Cameron of Erracht tartan and plays a set of Gillanders and McLeod bagpipes.

Iain prides himself in providing a friendly quality personal service to clients in piping, presentation and rapport. He is available throughout West Lothian and beyond.