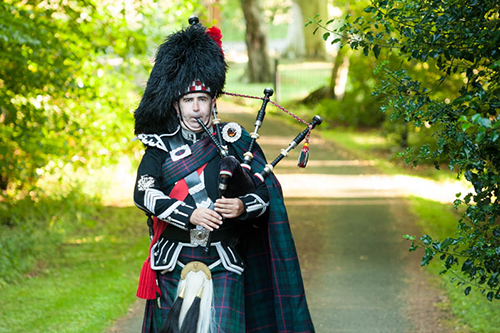 Steven Dewar has been playing the bagpipes since 1984, starting when he was only 8 years old with the Bowhill and Seafield Pipe Band. He was with the band for 13 years, honing his skills and his achievements with the band included winning a World Pipe Band Championship in Grade 4.

Steven emerged onto the solo scene as a teenager, placing in many junior tournaments, including winning the Fife Under 19 Championship at the age of 15. The following year finishing 2nd in the adult event. As well as many minor victories he also boasts two Bronze Medals from the Pibroch competition at the very prestigious Cowal Highland Gathering and a 2nd place at the World-renowned MacGregor Memorial Pibroch contest in Oban.

After 13 years establishing himself with the band and through solo work, he made the jump straight from Grade 3 to Grade 1 with the World-Famous Vale of Atholl Pipe Band, under the leadership of Pipe Major Ian Duncan. Steven enjoyed many successes with the band, winning prizes in every major championship in the premier grade. He has played throughout the world with the ‘Vale’ in festivals and concerts and, on numerous recordings including the famous Millennium Concert album, the band’s ‘Live from Frankfurt’ and ‘Back to the Future’ which were recorded live at the Glasgow Royal Concert Hall in 2006, which is available on CD and DVD. Steven has also played on countless World Championship releases.

Steven left Vale of Atholl in the winter of 2007, to join the new Fife Constabulary Pipe Band. This band became the first pipe band in history to go straight in at the premier level.

Piping Around The World

Steven joined the Peel Police Pipe Band from Mississauga, Ontario as a guest player for their 2012 season, winning the North American Championships and the PPBSO 2012 Band Champion Supreme Winners. Returning to Scotland in 2015, Steven re-joined the Bowhill Pipe band to help develop the next generation of pipers coming through. The band have gone on to win prizes in every major championship in the lower grades, except the World Championships.

In 2019 Steven joined Bagad Bourbriac from Brittany. A bagad is best described as a Celtic Orchestra featuring pipes, drums and bombards as well as other instruments. Steven so far has played at Festival Interceltique – Lorient, and the Bagad Championships in Brest with the band. An entirely different challenge to Scottish Pipe Band music, the band took 3rd place for piping in Grade 1 in Lorient.

Steven has built a career for himself as one of Scotland’s foremost performing pipers. He has over 20 years of experience playing at an array of different events. He is a resident Wedding Piper to many venues throughout Fife and Beyond.

Steven has travelled all over the World with his bagpipes, pretty much every country in Europe, as well as China, the USA, Canada, Taiwan and Kuwait.

Since 2011, Steven has headed up the Scottish Music Parade which is an international Scottish Show touring Europe and the USA gaining 5star acclaim wherever it goes. The idea is to present both traditional and contemporary Scottish music and dance to fans of Scotland and its culture. Steven manages and directs the cast of the show. The show attracts 1000s of visitors every night. As part of this he is also the front man of the show’s inhouse band Aceltica. Aceltica currently have three CD releases to their name: ‘Aceltica’, ‘Devil in the Kitchen’, and ‘A man’s a man’.

Through his businesses, Steven has been responsible for managing 1000s of events throughout the world and has performed to hundreds of thousands of people as a piper and DJ.

As well as piping, Steven has added DJ to his list of talents, using his entertaining skills to host many parties. He now the resident DJ for some local hotels.